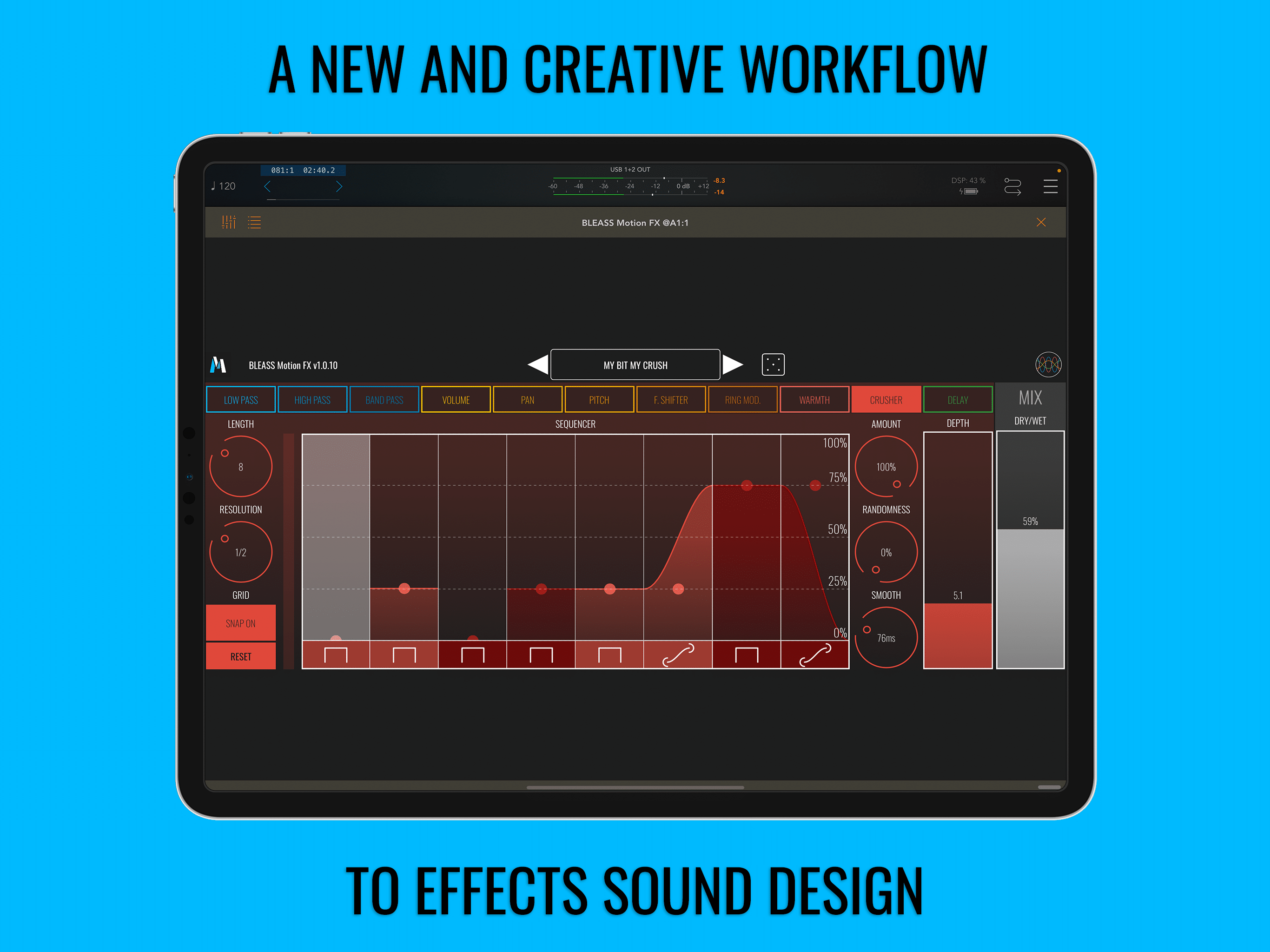 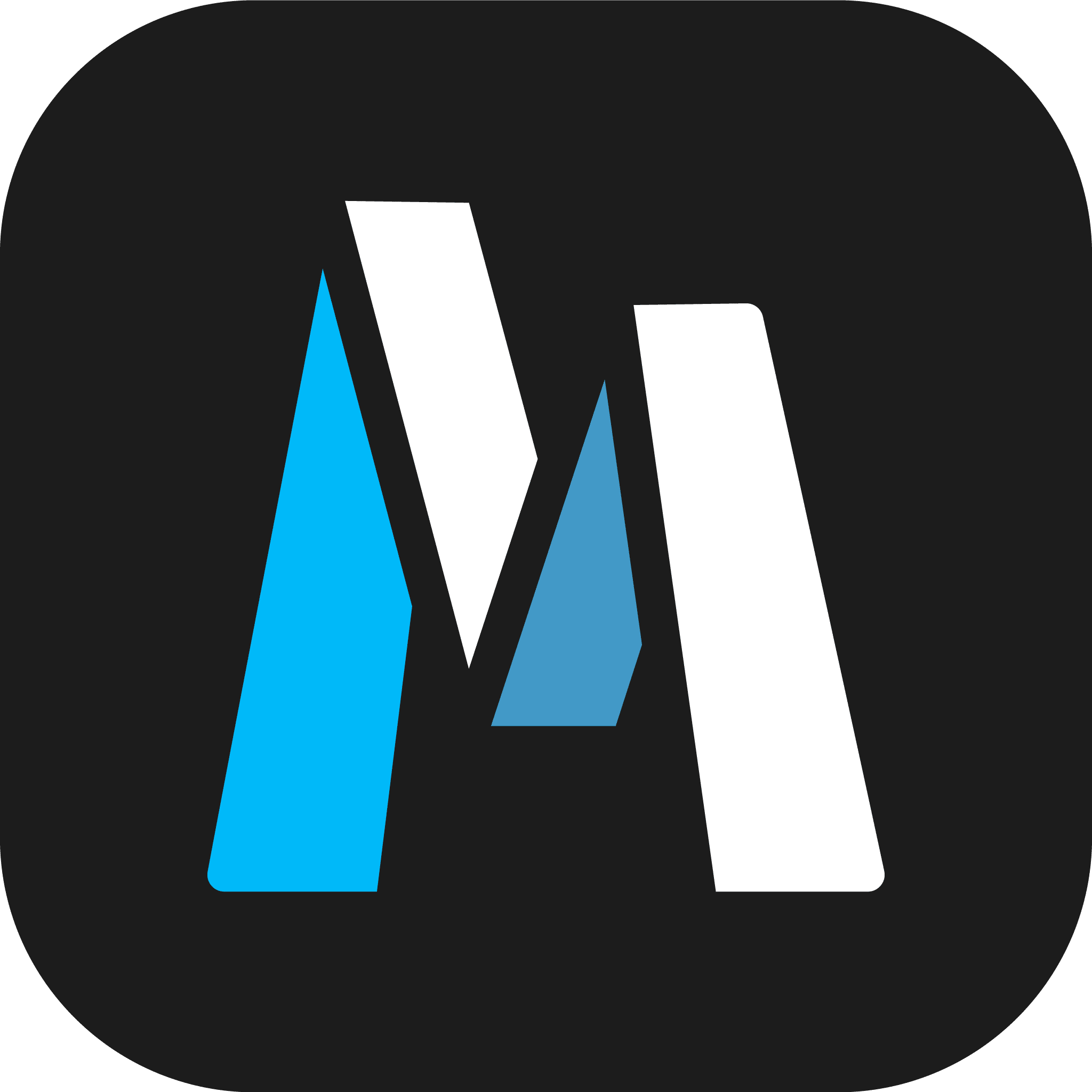 BLEASS Motion FX offers a new and creative workflow to effects sound design. Choose between 11 different effects and dynamically modulate it thanks to a highly versatile motion sequencer. Thanks to its very low CPU usage, load as many instances of Motion FX as you want and unveil new sonic territories! 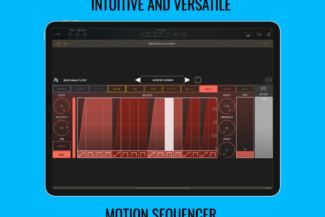 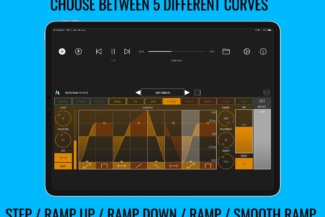 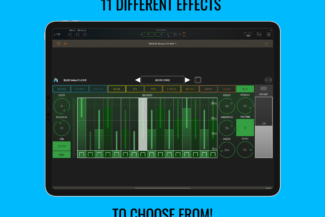 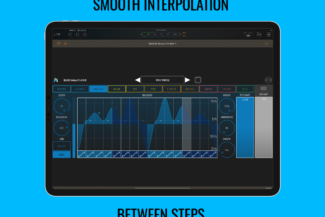 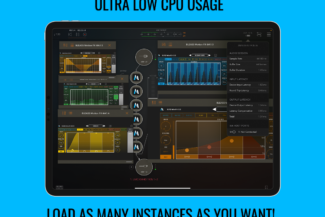 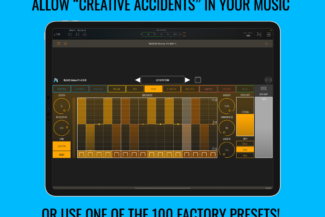 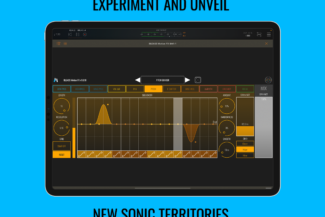 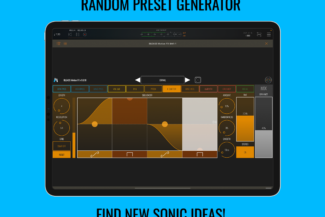 BLEASS Motion FX contains 11 different effects which you can modulate precisely thanks to an intuitive and comprehensive sequencer.

The 11 effects included are:

The sequencer offers 4 to 16 steps, each step has a value and a curve. You can set the value by touching and/or dragging the step and set the curve by tapping the curve icon at the bottom of each step. Curves choices are: Step, Ramp Up, Ramp Down, Ramp and Smooth Ramp.

Volume:
The sequencer modulates the gain.

Pan:
The sequencer modulates the pan.

Pitch shifter:
The sequencer modulates the pitch. The pitch range is +/- 12 semitones.
Grain Size sets the density of the granular pitch shifter.
Grid sets the sequencer grid to Chromatic, Major or Minor. Set Grid Snap to ON to quantize the pitch to the selected scale.

Ring modulator:
The sequencer modulates the frequency. The frequency range is 1Hz to 10kHz
Fine adds an offset to the frequency set by the sequencer.
If Stereo is On, Fine value for the right channel is the opposite to the left channel.

Delay:
The signal is delayed by a time set by the sequencer. The time range is 0 to 50ms.
Feedback sets the amount of delay feedback.
When Ping Pong is On, the delayed signal bounces back and forth between the left and right channels.
Stereo sets the difference between left and right delays.

We use cookies on our website to give you the most relevant experience by remembering your preferences and repeat visits. By clicking “Accept”, you consent to the use of ALL the cookies.
Do not sell my personal information.
Cookie SettingsAccept
Manage consent

This website uses cookies to improve your experience while you navigate through the website. Out of these, the cookies that are categorized as necessary are stored on your browser as they are essential for the working of basic functionalities of the website. We also use third-party cookies that help us analyze and understand how you use this website. These cookies will be stored in your browser only with your consent. You also have the option to opt-out of these cookies. But opting out of some of these cookies may affect your browsing experience.
Necessary Always Enabled

Performance cookies are used to understand and analyze the key performance indexes of the website which helps in delivering a better user experience for the visitors.

Analytical cookies are used to understand how visitors interact with the website. These cookies help provide information on metrics the number of visitors, bounce rate, traffic source, etc.

Advertisement cookies are used to provide visitors with relevant ads and marketing campaigns. These cookies track visitors across websites and collect information to provide customized ads.

Other uncategorized cookies are those that are being analyzed and have not been classified into a category as yet.